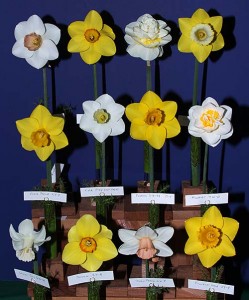 The Marie Bozievich Ribbon is for the best collection of 12 standard daffodils spanning at least 4 RHS divisions. Top row is Birky 2W-P, Santana 2Y-YYR, Heck 4W-Y, and Burravoe 1Y-WWY. Middle row is Gold Bond 2Y-Y. Cold Play 2W-YWW, Postles 3-8-89 1Y-Y, and Muster 4W-O. Bottom row is Sheer Joy 6W-W, Jenna 3Y-R, John Peace 2W-P, and Frontier Gold 2Y-Y. Exhibitor was yours truly.
This photo also shows the card pins (lip pins) made out of paperclips. Beyond that, you may notice that the staging properties look a lot like those at the Murphys show. The story about the properties begins with an old growth redwood tree that was about to fall on Mike and Dian Keesee’s barn in Fortuna. They had to cut it down. Then they used part of the wood to make a deck at their home. Mike then used some to make the properties for the Fortuna Garden Club. When they learned that the Northern California Daffodil Society was planning on new properties for the national show at Murphys in 2010, they donated some of their stockpile of redwood and persuaded Pacific Lumber (now Humboldt Redwood Co.) into donating some as well. Kautz Ironstone Vineyards (which is cohosting the 2010 ADS convention) donated the labor to make new properties out of the redwood. We modeled the new properties after the Fortuna Gaden Club properties, so that’s why they look alike. The primary difference is that NCDS is using plastic test tubes instead of glass, and the largest diameter that plastic test tubes typically come in is 16 millimeters, a little too small for the fattest tazetta stems. Anyway, when you come to the national show in 2010 and admire the properties, please remember the generosity of Dian and Mike Keesee, Pacific Lumber, and Kautz Ironstone Vineyards.
Kirby Fong